Water is a Sphere in Space 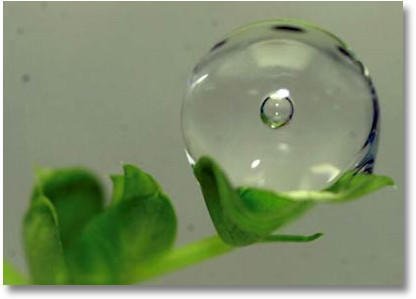 Water is a sphere in space. Here on Earth, we all live in a state of gravity. Not only us, but everything around us, including water, is being pulled towards the center of the planet by gravity. True, it is nice that our dogs don’t float off into space, but when a child drops their ice cream (which is full of water, by the way) they don’t have to know about gravity to be upset.

But, if you go far enough out in space, for instance, onto the International Space Station, gravity becomes negligible, and the laws of physics act differently than here on Earth. Just how might water act in a place of zero gravity? The photograph below of the water drop and air bubble gives you a good idea of how differently water behaves when the effects of gravity are counteracted.

Actually, on the International Space Station, there is plenty of gravity. According to NASA scientists, the pull of Earth’s gravity on the space station and its occupants is substantial: about 90 percent of the force at the Earth’s surface. But since the space station is continuously falling around our planet, the astronauts and objects on board are in a kind of free-fall, too, and feel nearly weightless. Water on the space station behaves as if in a zero-gravity environment. (Source: how-come.net)

This unique picture shows not only a water drop but also an air bubble inside of the water drop. Notice they both behave the same… according to the laws of physics in space. They both form spheres.  Water is a sphere in space. This makes sense, as without gravity to tug downward, the forces governing the objects are all the same. So, the water drop (and air bubble) form themselves so they occupy a shape having the least amount of surface area, which is a sphere. On Earth, gravity distorts the shape, but not in space.

Consider what would happen on Earth: The air bubble, lighter than water, would race upward to burst through the surface of the droplet. In space, the air bubble doesn’t rise because it is no lighter than the water around it—there’s no buoyancy. The droplet doesn’t fall from the leaf because there’s no force to pull it off. It’s stuck there by molecular adhesion.

Sticky water. No buoyancy. These are some of the factors spacefarers must take into account when they plan their space gardens. If water is sprayed onto the base of the plant will it trickle down to the roots? More likely it will stick to the stem or adhere to the material in which the plant grows. As humans spend more time and go farther out in space in the future, the physics of “space water” will need to be well understood.

Learn more by becoming a Member!

Water and the Energetic Light System By Suzanne Forcese Energetic light system. Can water make us...

END_OF_DOCUMENT_TOKEN_TO_BE_REPLACED

All the Earth’s Water