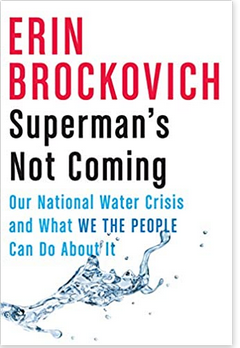 “Let me tell you that life takes an interesting turn when your name becomes a verb. Well, first my name became a movie and then it became a verb. To ‘Erin Brockovich something’ has become synonymous with investigating and then advocating for a cause without giving up.”
— Erin Brockovich, Superman’s Not Coming: Our National Water Crisis and What We the People Can Do About It.

She was catapulted to celebrity status in the 2020 Oscar-winning film, Erin Brockovich, starring Julia Roberts. The “98% accurate” portrayal of her fight in Hinkley, California, against utility giant, Pacific Gas and Electric Company (PG&E), was the largest environmental pollution lawsuit in American history.

A file clerk at a law firm, the single mom and former beauty pageant winner with no legal education, Brockovich toppled the billion dollar corporation for its role in groundwater contamination which she linked to a cluster of illnesses in the early 1990’s.

Twenty years later, she is recognized as an icon. Some have even called her a “Water Warrior.” Erin Brockovich is a renowned Consumer Advocate and Environmental Activist running Erin Brockowich Consulting where she advises people on environmental-contamination issues, consults with law firms, and travels the keynote-speaker circuit.

Her new book, Superman’s Not Coming, takes a sombre look at the world’s legacy of contaminated drinking water and brings us a blunt prognosis of water shortages caused by the momentum of climate change. Stark examples of the scars that have been left by the mismanagement of our planet’s most valuable resource speak to the urgency of our remedial actions.

Brockovich is now holding the torch, lighting the way for us to save ourselves.

WATERTODAY spoke with Erin Brockovich, whose legendary style articulated her own passion for water, our planet and every one of us who calls this home. Her ‘chutzpah’ still defines her but WT touched on a newer feminine subtlety of strength. She is a woman comfortable in her own skin having drawn on the strength of a father who taught her to revere water, a mother who taught her stick-to-it-iveness, and teachings from American Indigenous people and fishermen –the people who understand Water.

“Superman is NOT coming. And let me be clear I am not Superwoman but I am here to tell you we have to change. And we have to do it as individuals and as a collective. Superman is you, us.”

Individuals and communities across the globe have been asking Brockovich for help when there is nowhere else to turn.

“I think there’s an awakening happening,” Brockovich told WT regarding the challenges that have been thrust upon us. In the midst of a pandemic, climate change, systemic racism, the rollback of the Environmental Protection Agency Guidelines, Brockovich is here help to wipe the sleep from our eyes.

“We’ve kicked the can down the road too long. For the sake of money and greed we did not follow the Safe Drinking Act and now we are in trouble.”

What most people don’t realize is there are 100,000 Hinkley’s in America today. Small farming communities where industry dumps their waste and thinks they can get away with it.

My hope is that if more people know what’s really going on, we can bring life back to these towns.”

Sometimes ‘knowing what’s really going on’ can take years to see any form of resolution. In Flint, the quintessential water story, “with a lot of racism recently received a $600 million settlement with 80% of the funds going to people under 18.”

“There’s a certain amount of feeling that justice is served but what good is it going to do to someone who has cancer and is going to die because of drinking contaminated water?”

Serving as an advanced course in contaminated water knowledge, Brockovich’s book outlines the top toxic chemicals found in water, how they got there, and the potential health hazards they pose.

“We’ve got more than 40,000 chemicals on the market today with only a few being regulated. We’ve had industrial by-products discarded into the ground and our water supply for years.”

The most toxic offenders include:

“Like a blood test for disease, you can only find what you are looking for. If you don’t order a test for a certain chemical, you won’t find it. You can’t treat water if you don’t know what you are treating.”

Brockovich says, “Before he died, my Dad promised that in my lifetime water would become a commodity more valuable than oil or gold, because there would be so little of it. I believe he was right and that time has come.”

It is from her California home where her words to WATERTODAY sting with that prophecy as wildfires engulf the West Coast. This is Climate Change in real time, something that a “a lot of people can’t visualize until it happens in their own back yard.” “Climate IS Water.”

The last 6 years have been the hottest on record. As our climate changes, and we experience more droughts, floods, superstorms, melting glaciers and rising sea levels we are seeing our water supplies, infrastructure and economies being stressed to the limit.

“We’ve been in drought and so we have less water. Climate change is either about too much water or not enough water.”

Brockovich’s book talks about Cape Town, South Africa. “On Day Zero, when emergency water reserves would reach their lowest point, the city would shut off the majority of their pipes. Faucets at homes and businesses would run dry. To meet the bare needs of survival, citizens would receive 6.6 gallons each – half the UN minimum.

“I don’t have to be any of that to be human and to tell you that I have a voice. What I see is wrong. Grab that torch. Get more knowledge, more support and just keep going. Don’t ever let anyone get in your way.”

It all starts with the individual. “If your water smells funny or has a weird color, there is something wrong with it. Demand water reports. Learn what they mean. Find ways to monitor water in your own community. Get your neighborhood together, go to council meetings, get elected, use social media, radio, TV.”

“Leverage with other communities and network with collective communities. Here’s where you own the water.”

“Empowerment is a process that happens as we give ourselves authority to act on what feels right, what we know is right.”

“About 90% of the time it’s the moms. They are educating themselves, are going to council meetings, getting elected to councils, actually getting things done in their own backyard and no longer have the comfort to believe an agency has our back.”

We also need to listen to our Youth.

“They have the courage. It’s wonderful to see how their minds work. My own kids often say the most profound things. “We are the Baby Boomers. We’re great activists. We’ve accumulated wisdom. Put our generation together with the younger generation and we will see things happen.”

“The time has come for us to save ourselves.”
–Erin Brockovich

You can find more information about water at NaturalAction.com

Watch this video to learn how Erin is empowering others

END_OF_DOCUMENT_TOKEN_TO_BE_REPLACED

Bottled water is quick and easy to grab when you’re on the go. It’s touted as pure water extracted...

END_OF_DOCUMENT_TOKEN_TO_BE_REPLACED

A Single Drop of Water

We are now one step closer to efficiently generating electricity from A Single Drop of Water! A...

END_OF_DOCUMENT_TOKEN_TO_BE_REPLACED

The Spectrum of Water

By Suzanne Forcese Let's talk about The Spectrum of Water, greater than the sum of its parts. ...